A long weekend a long time ago

It was quite a while ago now but it still bears telling about our trip to Portland to visit Matt and Marieka and to meet their twin boys, Eli and Kellan, for the first time ever! It's disgraceful really that we hadn't flown up sooner to meet the boys. Even my dad and Carl had met Eli and Kellen before us!!

It was Super Bowl weekend and Rob and I took 3-days to hang out and catch up. We got off to a slow start after our flight was delayed three hours. I guess we were more lucky than most that day--we met some people whose flight had been delayed 9 hours! The biggest drag about our delay was that it caused us to miss Marieka's homemade vegetarian pizza that night.
Upon arriving, we immediately dashed out to see a local band--The High Violets--play at the Doug Fir which was a really cool venue. To quote Matt--

It's a very popular place because they do the
unthinkable: book a variety of bands, make sure music
starts at 9pm, and don't allow smoking. It's a
no-brainer, but most of their competitors think that
people want to hang out and drink and smoke, waiting
for the crappy opening band to start at 11:30 pm and
then get home at 2am and needing a shower to get rid
of the cigarette stench.

For some reason, Rob and I hardly ever go out to see live bands even though we both love music, so it was fun to go out. Unfortunately, the band lacked a dynamic stage presence and the sound wasn't mixed very well so, unless you really love zombies playing cymbals, the performance wasn't all that we had hoped.

Because of our flight delay, we still hadn't met the boys, but they tried their hardest to get us out of bed Saturday morning. They managed to convince me first and I walked out thinking I would alarm them and send them running the other way. On the contrary, I was greeted with a big, smiling face, like they'd known me all along. To my surprise, the one I thought was Kellen for the last two years is actually Eli (and vice versa) so I spent the next four hours trying to unlearn and relearn who was who.
We had a great, relaxing Saturday, starting with a walk around the neighborhood to get coffee. They live in a cool neighborhood with lots of nice shops and it was not raining, which was a bonus none of us expected.
That afternoon, I joined Marieka and her friend Kirsten on a hike around Mt. Tabor. It was a really beautiful spot in the middle of town and we had a nice time together. I had never really hung out with Kirsten but felt like I had known her a long time. I-boy went in her dad's house in Berkeley once so it's like we're all family, right? When we got back, Matt took Rob and I to try our luck at some pinball. There is an arcade, "Ground Control", in downtown Portland that has a bunch of vintage pinball and video games. It's quite cool and after 7pm you can get beer. Rob's friend Alisabeth and her husband Nicolas met us there. Alisabeth was the teacher in Rob's classroom for the last two years before getting married and moving to Portland. Surprisingly, I never had the chance to meet her in spite of the fact that she also plays soccer and is a fun and easy person to hang out with, as it turns out. Rob had never met Nicholas (who I apparently called "Nick" even though he goes by Nicholas. This may not seem strange to you, but I pride myself on calling people by the name they wish to be called so I was alarmed to find out I had done this!) I think they enjoyed meeting me but not as much as they enjoyed playing Joust. And certainly not as much as this woman was enjoying Ms. Pacman. 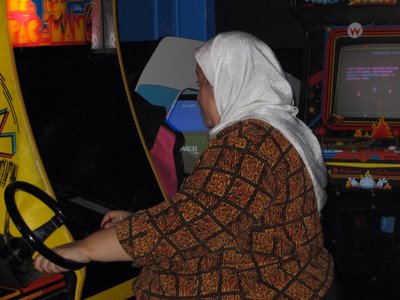 When we were finally able to pry Alisabeth and Nicolas' hand off the joystick, Matt took us out to the Tugboat for a beer. 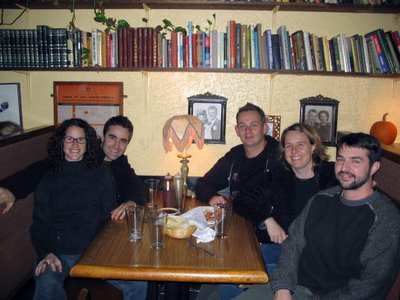 Later that night, the four of us went to a housewarming party while Marieka's mother looked after the boys. We had a few drinks, some snacks, broke the computer keyboard, fixed the computer keyboard, talked about vasectomies and reverse vasectomies and had an all-around good time. From there we went out for a midnight meal at Montage, along with everyone else in Portland. The food was fair, the drinks were good but the best part is they wrap your leftovers up into foil objects, guaranteed to give you hours of entertainment. 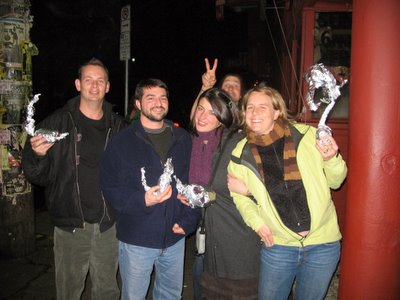 Onto Super Bowl Sunday--the biggest day in football--beginning with Liverpool v Chelsea. As we say, a 6-pointer. But it all went horribly wrong and Liverpool lost 2-0 basically quelching all hopes of winning the league. Then we had another football game, this time with commercials. Some of you may remember this one--when Pittsburg beat Seattle? 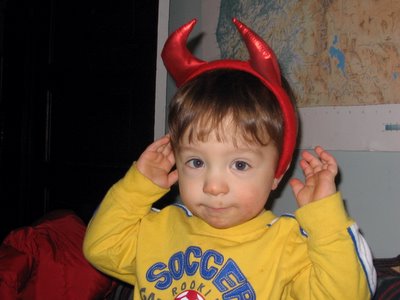 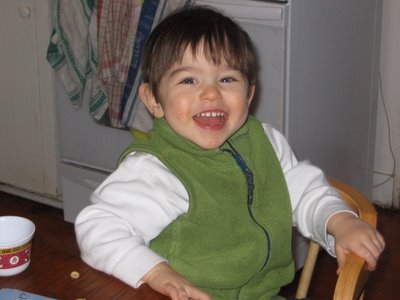 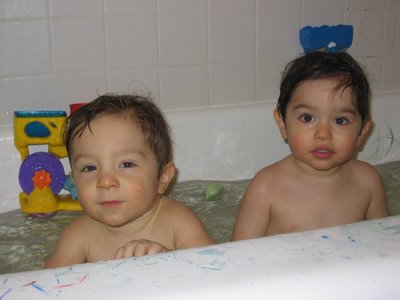 We're All Rockstars In Oakland

Though Michael's X-tal reunion was one night only, he had a complete rockstar weekend beginning with his rental car upgrade. Does anyone remember this scene from Seinfeld?

Well, Michael it seemed was living this episode when he arrived at the Thrifty counter on Wednesday afternoon. Only, after strutting his rockstar attitude around and throwing the confirmation down on the counter, he soon realized the reservation was for February 18--Not January. With his tail between his legs, he was kindly able to reserve a car for the next day.

Thursday morning I took him back to the airport and--taking a lesson from Carl's book of charm--Michael asked for, and received, a free upgrade. The rental car matched perfectly Michael's red-check flannel shirt and yankee personality--a Ford Jeep. 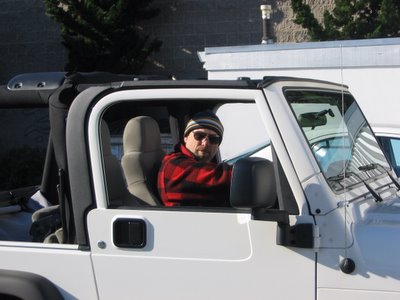 We then made sure to take him to Rudy's Can't Fail Cafe in Emeryville--twice--for a rockstar breakfast. The cafe is owned by a couple of (few?) guys, one of which is Mike Dirnt from Green Day. (You may recall Rob's posting from 12/29/04 where he ran into Mike Dirnt in Best Buy and got him to sign the Green Day CD he was buying me.) 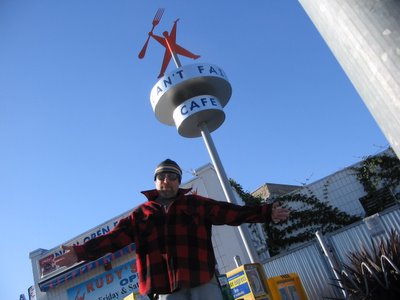 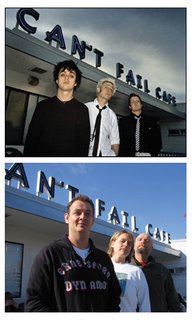 Finally, we gave Michael rockstar treatment at the Paragon Restaurant in the Claremont Hotel overlooking Berkeley and the bay. We ate a posh lunch on the patio overlooking the bay during what was an unseasonably hot day for January. I treated the boys in honor of their birthdays. This was a perfect way to end a rockin' good weekend with Michael. 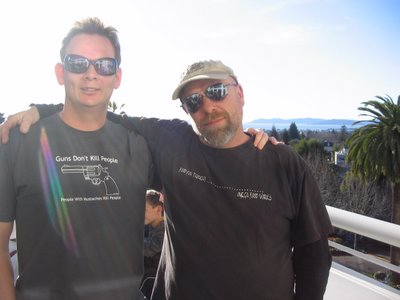 X-tal Reunited or "How we celebrated Rob's birthday"

No one loves his birthday more than Rob Carey--which is why he deserves a big medal of honor for foregoing his usual birthday celebration in order to celebrate the X-tal reunion instead.
On January 21, X-tal played together for the first time in 10 years at the Rickshaw Stop in San Francisco. Andrea's husband, Michael, flew out a few days prior to rehearse with the band and spend some time with me and Rob. We had a great time together those few days he was here enjoying some nice meals together and having lots of laughs.
It's been a long time since Rob and I went to see any kind of live music together so it was fun just being out. But it was downright bizarre to be at an X-tal show again and seeing all the same people in the crowd, only 10 years older. And when the music began, I felt completely transported to another place and time. It's a haunting feeling when something carries you into another time like that and it made my heart flutter in a strange way. I couldn't stop myself from singing along and was surprised to realize I still remembered so many words. I think everyone in the band really enjoyed the evening and isn't it great to be able to see a band again, knowing it will be the last time you'll get the chance? 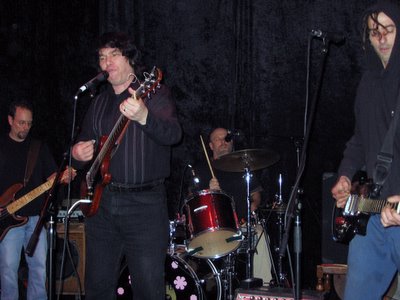 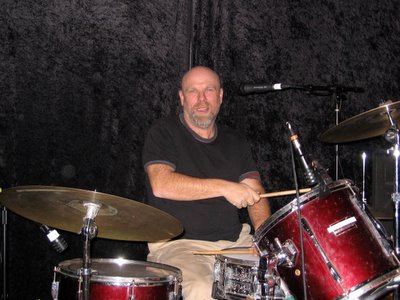 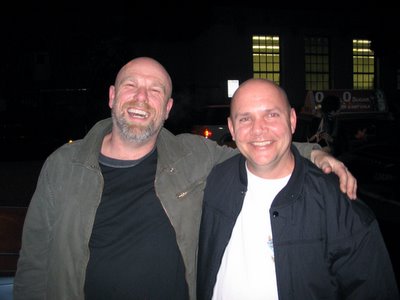 Poodle in the morning

I was thinking the other day, (No funny comments please)
Little I-Boy hasn't made the blog in a while, what are we thinking?
So here's a quick piccie of the little rascal. 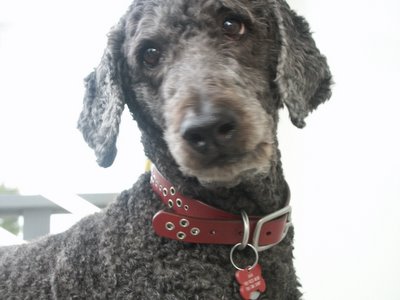