Nick Hornby signs for the VFFC!!

Yes, it's true Nick Hornby writer of Fever Pitch, About a Boy, and High Fidelity signed for the Velvet Fog last night, he wrote "For Rob, Nick Hornby" in my copy of Fever Pitch, then signed other books for members of the VFFC.
He also agreed to pose with the world famous VFFC shirt and was very impressed with our team name.
He has a new book out called "A Long way down" he read a few passages from it and it sounds pretty good.
You can hear the whole reading on radio station KALW. 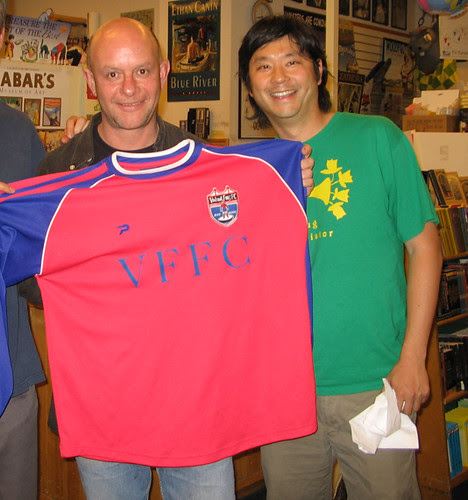 Bruce tries to pick something off Nick Hornby's shoulder.
Posted by Loo Read at 1:16 AM 5 comments:

The big news this week? No not Wacko Jacko getting away with it,
We are now a 2 car family.
I found this little beauty online and picked it up in San Ramon Tuesday,
it's a 1965 Volvo 122 (amazon), and it runs very well (At the moment), the I-pod works with the stereo too, nice!
Although I wish we had picked it up before 8:00pm as we didn't realise that the headlights don't work and things got a bit dodgy on the freeway, especially with a police car stuck up my backside.
Check out the plate, any ideas on what RMT 701 stands for? 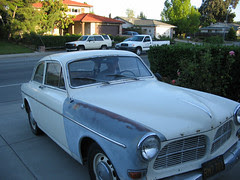 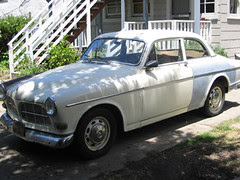 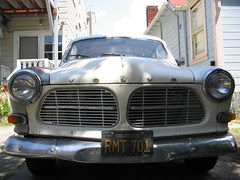 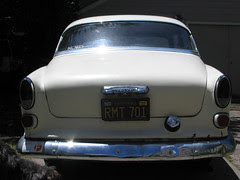 A couple of weeks ago Pat and Dina gave us their chair as they are looking to buy some new furniture.
Pat wanted to make sure that someone that he knew got it as he is very attached to it and wanted to visit it and drape his legs over the edge just like old times.
Well Pat, someone else has taken to it very quickly as you can see. Next time you're coming over you may want to call first to see if it's taken. 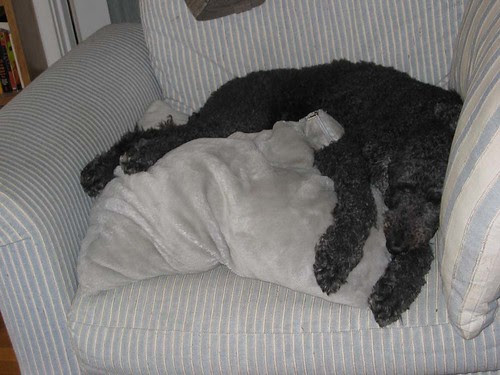 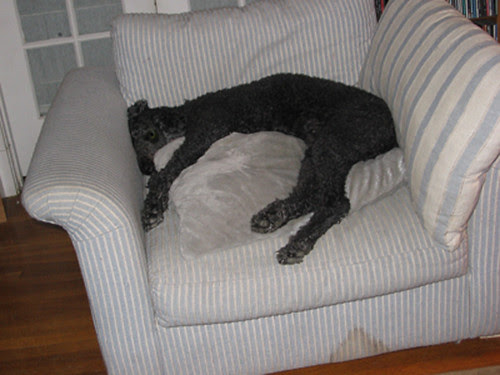 I suppose all brides and grooms have to disagree about something and well, our disagreement has been the registry. No, not where to register, but whether to register. Funny thing is, we agree on one thing, we don't really want gifts for our wedding. And on top of that, we both feel a little uncomfortable setting up a registry as it feels like we're telling people they have to buy us something. But as a good friend told me, "If you don't want gifts, don't get married." I'm of the opinion that if people are going to give us gifts, I'd prefer they be something we could actually use and enjoy. The idea of sitting in my living room surrounded by gifts that are useless or, heaven help us, ugly, is just too depressing for me to risk. So after countless conversations, procrastinations and scoldings from various family members, Rob and I finally decided to the plunge and register and let me tell you, it was not easy.

We started by putting a few things on a registry at macy's. I was pretty proud of us for setting anything up at all. But then Macy's suggests for the size of our wedding, we register for 200 gifts. We've managed to think of 13. 8 of which are all the same and were only recently added. The day Randy was at Macy's and asked to have our registry printed out, the sales clerk laughed in his face and told him it was the smallest registry she had ever seen. I think we may have humiliated him.

Next we went to REI where I could have registered for dozens of things but thought a bunch of new clothes for myself might be inappropriate for a gift registry. We were able to come up with 6 things the two of us could use though so it wasn't a wasted trip.

With 181 gifts to go, we realized we had to call in some support. Gretchen Junker to the rescue! On Sunday, she took us out to Crate and Barrel to try and add some more things to the list. Crate and Barrel has it all figured out. They offer couples a handheld scanner you carry through the store to scan the UPC codes of any item you're interested in. At the end, you just load the scanner into the registry box and it updates your registry. So Rob goes up to the counter and asks for "The Gun." What a man, eh? A gun. Funny thing is, the clerk followed suit, also calling it a gun. Except when he was talking to me and suddenly it became a "toy."

With the right equipment, we were able to shoot, are you ready for this, 50 more gifts! That's about four times better than we were able to do anywhere else so, obviously, Gretchen's assistance really made an impact. Perhaps it was the hand shadow threats she made to us on the third floor.

Holy mackeral, only 131 more to go. Is it even possible to think of 200 gifts that you want for yourself? We are about tapped out of ideas so we went to www.thehoneymoon.com and finished up our registry with things that we want to enjoy on our honeymoon in Kauai. We're not quite at 200 but if we just don't log on to Macy's any longer, we can easily avoid the bright red "low registry" warning. Please, haven't we gone through enough?

Take time out to view our gift registry dance if you need some inspiration.
Posted by Karzimodo at 11:01 PM No comments:

Well, Rob and I have finally come back to Earth after Liverpool's stupendous win and realized we've left you all in the dark for too many weeks now! So, bear with us as we revisit some of our recent activities, most importantly of which, Iain and Parmjeet's wedding in Miami a few weeks ago.
Rob and I, along with a handful of our soccer friends, flew to Miami to join Iain and Parmjeet in a weekend of wedding celebrations. It was a fun and fantastic weekend, not to mention educational. Here are some things we learned:

1. IST (Indian Standard Time): No, actually, I'm not referring to GMT +0530 hours. Turns out IST is about one to two afters after any event start time. Say, for example, you're invited to a sangeet (A function hosted by the girl's family, in which just a few close members of the boy's family are invited. The girl's family sing songs in which they tease the boy and his family, telling them to thank their stars they were lucky to find such a wonderful girl. who they probably didn't deserve!) If you show up 30 minutes late, and the dinner tables are still being set up and there are hardly any people there, you may be experiencing Indian Standard Time. It's nothing to worry about, just hang out and pretend you're totally comfortable with the whole situation, and wait another hour, suddenly swarms of people will arrive. Including the bride and groom.

2. "Auto safety" in Florida is an oxymoron. Every time we got on the freeway, we drove by a car accident. Some were not so interesting, a mild fender bender, but the totaled cop car was pretty impressive. Almost as exciting as the SUV on it's roof, waving us goodbye on our way to the airport.

3. When they talk about experiencing "cold feet" before a wedding, we had no idea that it meant no hot water in the hotel for a morning shower. Turns out almost everyone who showed up for Iain and Parmjeet's wedding from the hotel, arrived with cold feet. Including the groom. Poor chap.

On a serious note, however, we had a brilliant weekend. It was really fun travelling with friends and the wedding and reception were absolutely gorgeous. The wedding was on Saturday morning at the Sikh Temple and was a wonderful and different experience. Iain dressed in traditional punjabi wedding attire and grew a beard for the ceremony in keeping with Punjabi custom. And Parmjeet was a stunning Indian bride.

And Rob went as a pirate.

The reception that evening was at Vizcaya Museum and Garden which is a national historic landmark in Miami. As I looked it up just now, I discovered that it was built by an American Industrialist, James Deering in 1916. Which is interesting only because someone at the wedding told me it was built by John Deere. And I've since told a dozen people the same thing. I'm a crap docent. Anyway, here's a photo of the place--AMAZING.

We've posted our photos from the weekend at Kodak Gallery if you want to see some more--Can't wait to see the official photos!
Posted by Karzimodo at 11:56 PM 1 comment: