I Think I'm A Moth

A man walks into the doctor's office and says "Doctor, I think I'm a moth."
The doctor replies, "Hmm, I don't think I'm the right doctor for you. I think you should go see a psychiatrist."
The man answers, "I was on my way to see a psychiatrist just now, but then I noticed your light was on."
Posted by Karzimodo at 12:19 AM 2 comments:

Isn't it great to wait months and months for an event and then finally get to go! Several months ago I bought myself a birthday gift--tickets to go see Wayne Thiebaud at City Arts and Lectures with Rob, Gretchen and Kevin. Do you know Wayne Thiebaud? He is without a doubt my favorite painter and a true American Idol. It's always dangerous to go see a lecture or presentation by someone you really like because you run the risk of finding out they aren't as nice as you imagined them to be. Wayne did not disappoint. He was funny and kind and completely unimpressed with himself. He has taught art for years at UC Davis and continues to teach there even though he is no longer really on the faculty. As he put it--"They can't fire me if I'm not employed. And I don't have to attend faculty meetings."
He is passionate about art and in despair that we are taking art out of our schools and "we are teaching only half the person."
I felt so fortunate to have had the opportunity to attend this lecture and, to top it all off, he was in the lobby on our way out signing autographs. I luckily had brought one of the Wayne Thiebaud books I have and he graciously signed it for me.
How cool is that?!!

Some of you may recognize it as Rob gave me a reproduction of it for my birthday one year and it hangs in our home. It was very difficult to choose just one so I encourage you to check out more Thiebaud paintings here.

If any of you are wondering what to buy us for a wedding gift--a Wayne Thiebaud original is a perfect idea. I tried to register for one but it turns out they don't have a wedding registry at Christie's Auction House. Shame.
Posted by Karzimodo at 1:38 AM No comments:

At what point does something become a tradition? I learned through years of insult and humilation from my family, that a tradition does not begin after you've done something only once. Or perhaps, the lesson they were teaching me is that a bathroom stop en route to a destination should never qualify as a tradition. Particularly if you've only stopped there to go to the bathroom one time. Anyway, that's not the point. The point is, this is the second year in a row that Rob and I have gone to an art exhibit with Randy to celebrate my birthday. I'm going to now declare this a birthday tradition. Sorry Randy. You're stuck with me.
This years' exhibit was the Robert Bechtle retrospective at the SF Moma and was a lot more enjoyable than the overcrowded and less interesting Art Deco exhibit we went to last year at the Palace of the Legion of Honor. If you live in the Bay Area, I recommend you try and see this exhibit before it leaves June 5. It's AMAZING. Bechtle is a photorealist painter who paints with amazing creativity and precision. There is no way that I could do it justice on this blog but here's one of his paintings--

We took so much time examining every painting in awe, that we needed to sit and rest. Rob took it as an opportunity to try out his new leper joke. Unfortunately, it was lost on Randy as he thought Rob said "leopard."

After the exhibit, we went to Randy's and Cheryll's for dinner and wine and laughter. I-boy tries to get all of Roxie's toys and Rob inadvertantly insults Cheryll's dinner when he comments that he's been eating too much cheese. A perfect evening.

Happy Birthday to me!
Rob did an exceptional job planning a birthday for me this year beginning with two very great gifts--a necklace and the book The Art of Monsters Inc. Both things that I really wanted but would never have bought for myself. Then he took me to Kennedy's Pub in North Beach for dinner. It's a funny place, Kennedy's is. It doesn't look that great on the outside, or on the inside for that matter, but they have a couple of air hockey games and they serve Indian food. Neither of us had been there before and Rob kept reminding me that it was "Pat's idea", in case it turned out to be crap. (It didn't, incidentally.) Across the street from Kennedy's is Bimbo's 365 nightclub which is a really fun place to see bands. Having just received the workshop schedule from the San Francisco Center For The Book, I was very dangerously trying to walk and read at the same time and so did not notice the marquis at Bimbo's, much to Rob's delight.
Not long after we arrived at Kennedy's, Iain, Parmjeet, Pat, Dina, Bruce and Julia all showed up to have dinner with us. Iain, not so discreetly told Rob "they were sold out when I went this morning but I was able to buy a couple of tickets just now." Something at that point made me believe we might be going to Bimbo's later that evening. This suspicion was confirmed with Pat walked in with a Ticketmaster envelope "almost introducing itself" out of Pat's shirt pocket. Bruce came in saying he hadn't had any luck at all getting tickets.
So while I was certain we were going to Bimbo's I was quite enjoying the suspense of not knowing what I was going to see. I managed to keep my head down all the way across the street, into the building, through the lobby and onto the dance floor right in front of the stage without seeing any signs indicating what tonight's venue was. All that was left, was figuring out the band once they walked on stage.
The opening act was a DJ, or a couple of them, and one of them looked remarkably like the guitar player in Los Amigos Invisibles--a Venezualan funk band we had seen at Bimbo's about five years ago. I asked Rob if it was them playing tonight and he said no. Then all these guys walked on stage and the audience went crazy, holding their hands out to shake hands with the band members, but I didn't recognize any of them (except for the one guy who still looked like the guitar player in LAI). Then the DJ mix segued into the band playing and look, the guitar player looks and SOUNDS like........Hey, it ISVLos Amigos Invisibles!! What a fantastically fun band to see on my birthday!!

After leaving the show, we drove Iain and Parmjeet home and were invited inside for a cup of tea and a FoodSaver demonstration. After vacuum packing a slice of bread, Iain concentrates on vacuum packing a wedding invitation into a lethal weapon. That PhD in engineering is ever so useful. I wonder if his tongue sticks out when he's developing computer chips?

Posted by Karzimodo at 11:34 PM No comments:

And you thought the clock was ticking quickly for my wedding, well Parmjeet's is just around the corner! She and Iain are getting married on May 21 so it was definitely time for her bridal shower.
Her friends Meeta and Smruti did a marvelous job planning an afternoon in honor of Parmjeet beginning with a gorgeous buffet full of salads, asparagus, eggs and cinnamon rolls. Next we all wrote down one piece of advice for Parmjeet and she had to guess who it was from. She had no idea how wise her friends were but if she heeds our advice, she'll be well equipped to make a good wife.
Next we decorated headbands with flowers and ribbons--Meeta made a lovely one for Pami.

We continued with a portrait session during which we all had to draw a portrait of Pami. Unfortunately, she couldn't sit still and I believe this negatively affected the quality of our work. Her restlessness made little impact on our word game, however. During this game, we each had 5 minutes to make as many words as we could think of using the letters in PARMJEET KAUR RANDAHWA. There are about a million possibilities if you want to try. My personal favorites (thought of by people other than me, I regret to say) were Parakeet and Pajama.

Finally, she opened her gifts. I'm not going to show many of them here, lest I ruin any honeymoon surprises, but I think Iain will appreciate them quite a bit. Particularly this one.

Parmjeet is glowing with happiness and it was especially nice that her sister-in-law and mother could make it all the way from Florida. I also thought it was nice to meet some friends of hers that aren't soccer friends. I forget that people have those! Thanks to Meeta and Smruti for all their thoughfulness and generosity in making it a lovely afternoon.

Posted by Karzimodo at 11:18 PM No comments:

Here's a place you should check out if you're in the East Bay, the Lucky Ju Ju in Alameda. It's open Friday and Saturday night 6 - midnight.
The games are left on freeplay so they ask you to donate at least $5.00. They also have a fridge so you can bring your own drinks. 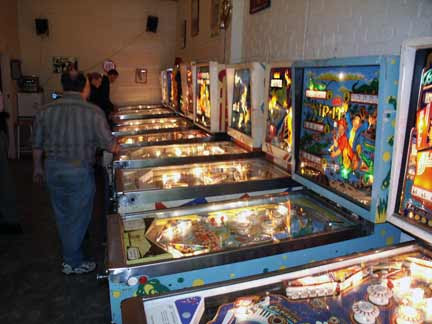 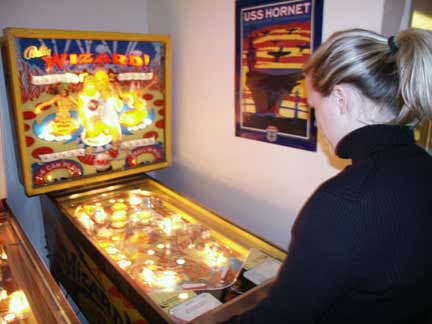 She sure plays a mean pinball. 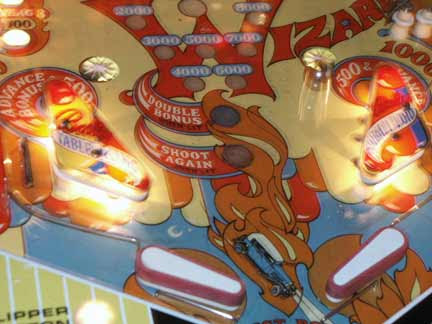 I forgot to mention that we found a new dog park in Alameda and took Ian there before we went to Lucky Ju Ju's. 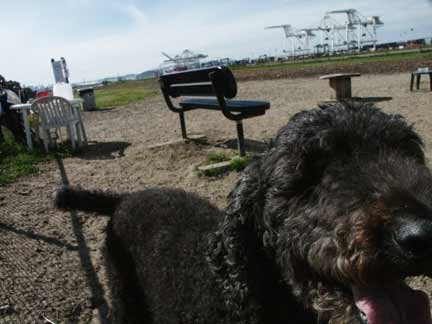 Greg and Tugso came over tonight to watch The Amazing Race with us. When Tugso first moved to America, Rob and I tried to get her interested in this program but she wasn't impressed. I think there was just way too much going on for someone whose first language was not English and who was generally overwhelmed with life in a new place. And then Greg and Tugso lived in our apartment with us for one month and they were forced to watch all our favorite programs and guess who's hooked?
The bummer was, one of our favorite teams went out this week--the brothers, Greg and Brian. We liked them because they always made funny jokes when they opened the clues. Like, "Make your way to your mother's kitchen for her famous homemade enchiladas."
They went out in style though--

Tugso does some meditating in our living room. And you thought I had hairy legs!!!

After Greg and Tugso went home, Rob and I stayed up way too late to watch Liverpool v Juventus in the Champions League. FANTASTIC!! The game was superb. Liverpool came out and played a fast and great game and came away with a 2-1 win at home. The second leg is next week and if they win or draw, they'll go through to the next round. What we don't want to happen is Liverpool lose 1-0. That would be bad for blogging. The game is on ESPN2 on Wednesday if you want to tune in.

Posted by Karzimodo at 12:40 AM No comments: