It's been a long time since I posted anything nutty so here you go.

We recently visted Neville and Loralee (before Warren was born--Congratulations N&L!) at their new spot in Fairfield. In addition to giving us a nice meal and torturing me with some spicy Doritos that I couldn't stop eating, they also sent us home with a bag of walnuts fresh off their tree. Anyone who knows me, surely knows I don't like walnuts so how Rob thought he would go through a whole bag on his own, is anyone's guess. When we got home that night, we left the bag of walnuts on the porch.

Later that week, upon returning from work, Rob found a parade of squirrels going up and down our back steps and hauling away walnuts. Thinking this was far more enjoyable than cracking them open to eat on his own, he decided to bring the bag indoors and slowly ration the walnuts to the squirrels over time. How cute.

The fun reached it's maximum this weekend when Rob heard an unfamiliar scratch at the door. He opened the door to find a squirrel gnawing away at it--shards of wood scattered about. (Let's hope our landlord doesn't read our blog.) Rob then moved the bag down a few steps while he finished up a phone call with his mum and dad. The squirrel was not deterred. 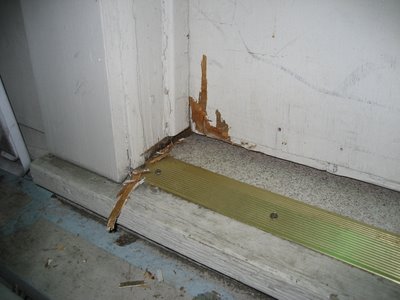 As soon as Rob hung up, we knew we had to move the bag away from our porch. So we put it the one place we wouldn't mind the squirrels hanging around--the neighbors house. You know, the ones who let their dog crap all over the yard and then never clean it up. Trouble was, the squirrel hadn't figured out where the bag had gone and kept returning to our porch to find it. While he was sniffing around and I was filming the action, I suddenly realize our back door was open. About the same time he realized the same thing. Rob, who was on the ground, had the brilliant idea of throwing a tennis ball in the house to move the squirrel in the opposite direction. How could he have anticipated the squirrel would chase the tennis ball into the house? We don't have very stringent gender roles in our house but chasing rabid varmints out of our house is definitely a man's job. So I went after it (just kidding--Rob did!)

The squirrel bolted all the way through the house, into our bedroom and then sprung onto the blinds. I was not into this scene one bit so I went back outside, all the while imagining the squirrel springing onto my head or something horrible. Soon Rob comes to the back door with a broom in hand and says--"here he comes"--before tossing I-boys squirrel toy at me. Without time to think, I completely FREAK OUT! That's the kind of joke you love--except when it's played on you. 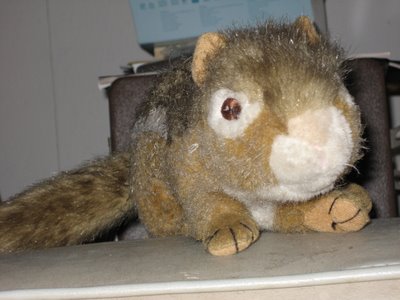 Rob finally got the squirrel out of the house. Only 7 walnuts remain.
And Rob's birthday gift from Peter and Agna couldn't have been more timely. 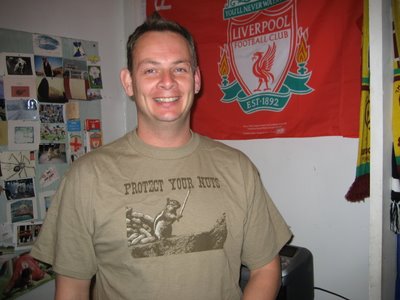 GREAT story. I miss you guys!